Honestly, what the fucking fucks is wrong with some individuals of the male species??? Why do they have to judge everything and anything a woman does in retrospect to their vaginas, what they do with them and what comes from them? When will they realize that the female is much more than their 2.75 inches’ systems?? When will a woman’s success stop being associated with their sexual endeavors? Why does anything a woman achieve have to be related to this? Why does the president appointing Kanze Dena have to trigger some stupid incapacitated human to allege that she slept her way through this? Why does the death of two smart talented gorgeous female captains lead to an imbecile claiming that is why women should not be entrusted with ‘men roles’? 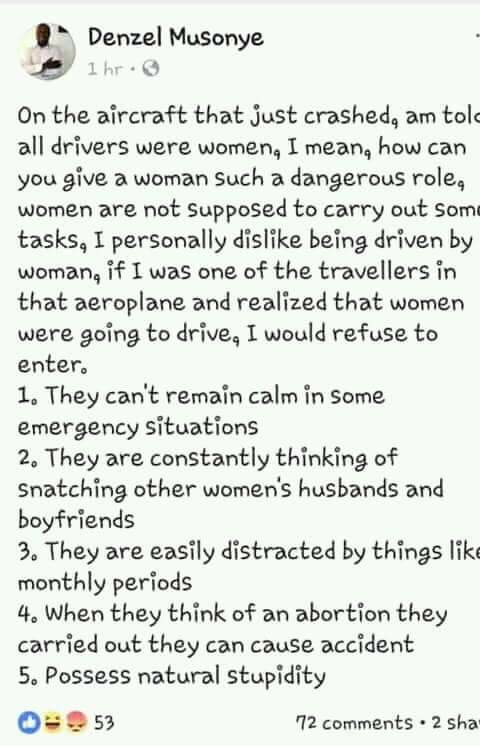 Why does our society let such rot flourish? Why does it support the ravaging and the devouring of the women on top? Can’t a woman be as smart as a man? Can’t she have as much sexual freedom as the man? Can’t she decide her own sexual endeavors and plights just as a man does? When did it become morally standard for a woman to be married and nurture a man? When did this become the measure by which to determine how moral one is and whether they merit the successes they achieve?

And let no one blame this on culture as culture is a way of living, a social behavior that we transmit to others through our social learnings. Thus as a people, we have chosen this oppressive culture. We have chosen time and again to subjugate our other half of the population. We have chosen over and over to reduce the value of our mothers, sisters, wives and friends to their sexuality, their allocated roles. Can you imagine if day by day you had to live making daily decisions depending on whether the society will accept them as appropriate. From whether to wear that crop top, to whether to have a nose ring. From whether to post a bikini photo, to whether to write a feminist article. Each day, you are wondering whether what you do will be appropriate for your society, wondering whether if I voice my feministic approaches, will they consider me a bitch? Will the radical Christians condemn me doomed for hell? Will I be damned to forever alone as no man is willing to hear and support such opinions?

And do you know what’s even worse? The fact that some of our sisters see nothing wrong with this. Some of them actually oppose feminism, on the basis of faith or whatever. Some even join the males on the stoning and shaming of their sisters. Some even shout the loudest while hoe calling their fellow females. Women, when will we realize that we are the victims of the established social system? When will we realize that the more we banish each other the weaker we become. Why don’t we stand by each other? Why don’t we support one another? Why don’t we fight gender oppression together? Let’s empower one another. Let’s open our eyes to the subjugation inflicted upon us as the worst form of oppression is one where the oppressed supports the oppressor.